462. Faithful Friends In The Frozen Continent. 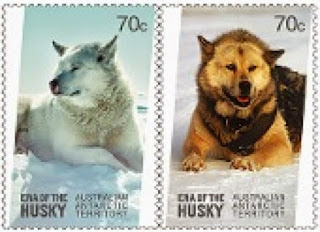 Australia Post's issue of the week is inscribed "Australian Antarctic Territory" and will be released on 9 September 2014 to play tribute to the role of husky dogs in the history of man's involvement with Antarctica. The issue consists of 4 gummed stamps, 1 gummed miniature sheet and 2 x 70c self-adhesive stamps issued only in booklets of 10 stamps although it is hard to believe that scientists in Antarctica research stations are in need of booklets of 10 self-adhesive stamps to send their mail back home. These stamps were designed by Jo Mure and lithographed by McKellar Renown:- 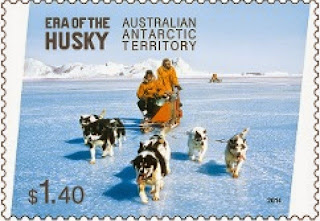 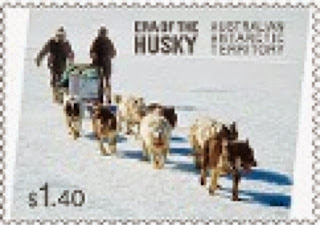 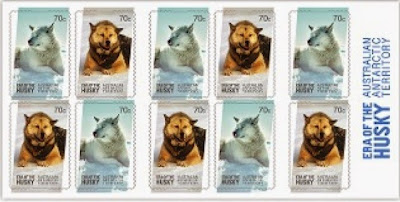 Mail services to and from Sierra Leone have been suspended by Royal Mail from 21 August 2014 and by other postal services because of the suspension of flights to the country due to the serious outbreak of Ebola virus in the country. The suspension is ongoing and Royal Mail report that any mail in the system will be returned to senders and no further mail will be accepted for sending on to Sierra Leone.

On 6 September 2014 the government of Sierra Leone announced a 3 day "lockdown" in which the inhabitants of the country will not be allowed to leave their homes for 3 days from 19 to 21 September 2014 in an attempt to stop the spread of the disease. Compared with the terrible effects of the disease on the people Sierra Leone, philatelic consequences are of course trivial but covers may well appear with "Service Suspended" marks on them and collectors will think twice about any stamps "issued" by Sierra Leone's foreign philatelic agents during this period - their appearance for sale in post offices in Freetown or elsewhere in Sierra Leone seems extremely unlikely to occur.
I find it difficult to understand the precise dates of issue of recent items from Malaysia - for instance the country's latest release is a single stamp which commemorates the 57th anniversary of the country's independence but the date of issue is given as 31 August 2014, the "date of sale" at "General pos outlets (GPO) countrywide and Gallery KL" as 2 September 2014 and "date of sale at all Pos outlets countrywide except GPO" as 8 September 2014. So collectors must draw their own conclusions about the true date of issue of this item. The stamp was designed by Hazel Design and lithographed by Percetaken Keselamatan Nasional Sdn Bhd:- 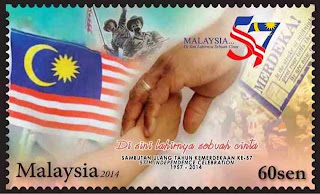 2014 is the centenary year of the establishment by the British of Nigeria as a single political entity when their Protectorates of Northern and Southern Nigeria were combined on 1 January 1914 into the single colony of Nigeria. This large united colony achieved independence from the British on 1 October 1960, firstly as a monarchy with Queen Elizabeth II as its Head of State and then as a Republic from I October 1963.

I have not yet seen any news that suggests that NI Post, the Nigerian postal administration, has issued any stamps to commemorate this highly significant anniversary but it may be that no such philatelic commemoration is seen as being acceptable because the unification took place as the result of what may be viewed as the action of a colonialist power.
Meanwhile events in the north of Nigeria threaten this 100 year-long unity of the country as the Islamist terrorist group, Boko Haram, has seized territory and, following in the footsteps of the appalling Islamic State in Syria and Iraq, have declared the territory which they now control to be a Caliphate, a de facto separate state. Presumably, eventually, there will be philatelic consequences of this action unless the Nigerian military are able to defeat the terrorist army although I don't expect that we shall see stamps or even an organised mail service connected with this declaration of a Caliphate in northern Nigeria any time soon.