445. Birmingham, The Post Office And The First World War.

This exhibition is a mark of our respect for those whose courage and sacrifice in the First World War changed the course of history. Paula Vennells, Chief Executive of The Post Office, 2014.

Norvic Philatelics Blog recently detailed news of a travelling exhibition which The Post Office had prepared with The British Postal Museum and Archive on the role of The Post Office during the First World War. I was pleased to see that the exhibition was coming to Birmingham, a few miles from my home, within a few days of reading Norvic's report and I made plans for a special trip into town to visit the exhibition which was being held at Birmingham's main post office in Pinfold Street, just off Victoria Square. I very much regret having to write that I was very disappointed with what I found.
I walked into the post office from Hill Street and walked right around the post office and could see nothing that looked like an exhibition. I asked one of the helpful assistants there where the exhibition was being held and after a second or two's thought she pointed out that there were several display boards scattered around the post office, one or two in corners and all indistinguishable, unless one looked closely at them, from posters advertising travel insurance or promoting the currency exchange counter. It wasn't quite what I was expecting - the use of the word "exhibition" put a picture in my mind of a display of, say, medals awarded to soldiers of the Post Office Rifles or perhaps a uniform of the regiment or examples of mail dating from the war or other interesting artifacts - not something that consisted entirely of 5 posters scattered in any available space in the post office.
I suppose I was expecting too much. The Post Office was making an attempt to convey to its customers its work during the Great War and recognise the sacrifice of those who fought in the war who had Post Office connections but it really was very poorly presented. No-one else in the building was looking at the material and did not seem to be aware of it which is a great pity. Below I show photographs of the display panels, the first titled "The Great War". The writing is quite small and stretches down almost to the floor so that to read it requires bending forwards which is an active discouragement to studying the wealth of information on the display cards:- 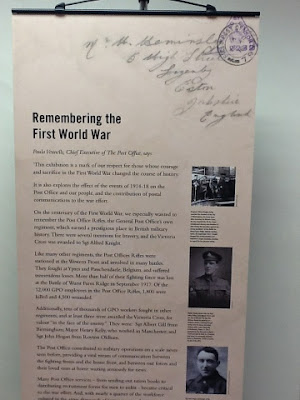 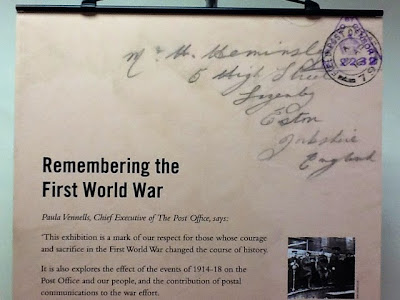 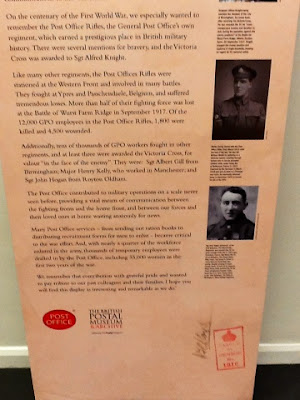 Another one of the panels was titled "The Post Office Joins Up":- 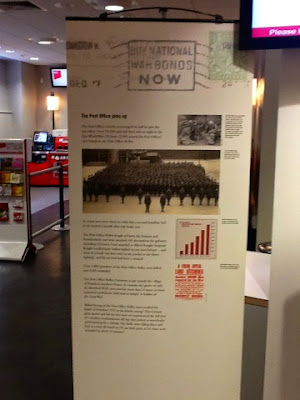 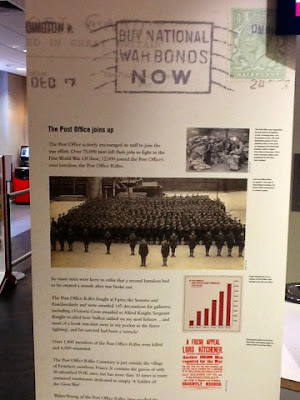 And a third display panel was titled "The Post Office's Home Front":- 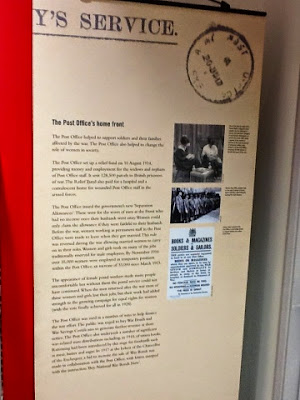 A fourth display was titled "Front Line Communications" and I forgot to go back to look at the fifth panel as I roamed around the post office so I am unable to say what is the title of the fifth section:- 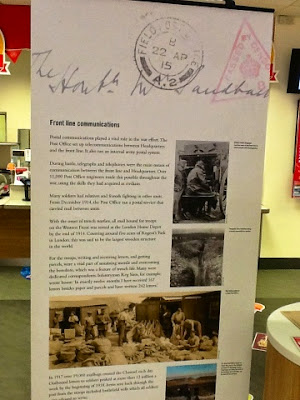 Full marks to The Post Office for making the effort to produce this "exhibition" but sadly I find it to be somewhat underwhelming and poorly displayed. Perhaps when it moves on to its next venue in Bridgend in Wales its presentation can be improved.
Birmingham newspapers recently featured an interesting story about the Post Office and the First World War. A remarkable monument to 7 postmen who had worked in the Erdington area of the city and who were killed during the war had been found in a building which had been demolished. The discovery was made in Ladywood, an area some distance from Erdington, and no-one knew how it had found its way there. Members of the Birmingham History Forum managed to discover that all 7 men named on the memorial had worked and lived in the Erdington area. Royal Mail held a ceremony at the National Memorial Arboretum on 20 July 2014 to rededicate the memorial and to honour the 7 men named on the memorial. 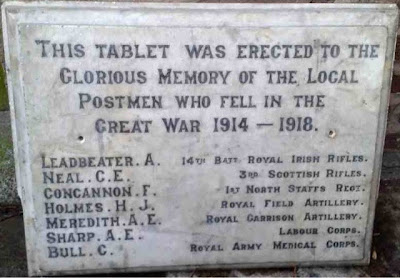 Royal Mail is the custodian of about 250 memorials to those killed in World War I and many are accessible to the public in the receptions of delivery offices.
Post Office employees who lived in Birmingham feature heavily in the story of the Post Office's involvement in the First World War. Royal Mail commemorated Alfred Knight, who was the only soldier of the Post Office Rifles to be awarded the Victoria Cross, on one of the panes of the prestige booklet it issued in 2006 on the occasion of the 150th anniversary of the Victoria Cross. On 20 September 1917 Alfred Knight single-handedly captured a machine gun nest which had put his platoon under heavy fire. He also carried out other acts of remarkable bravery. He had been born in Ladywood on 24 August 1888 and worked as a clerical assistant in the North Midlands Engineering District. 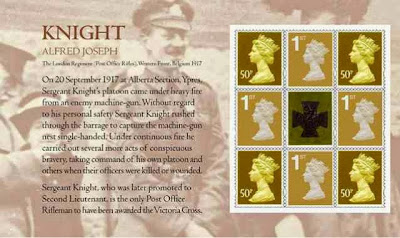 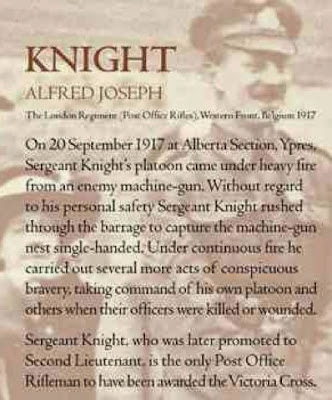 Although I found the First World War "Exhibition" to be rather disappointing I have learned quite a lot about Royal Mail and The Post Office's involvement in the Great War - the General Post Office (GPO), as it was then known, released 75000 of its employees to participate in the war; the GPO's regiment - the Post Office Rifles - had 12000 of its employees involved with it and the regiment participated in the campaigns at the Somme and Passchendaele. More than half of its fighting force was lost at the Battle of Wurst Farm Ridge in September 1917. Of the 12000 post office employees in the Post Office Rifles, 1800 were killed and 4500 were wounded.
Birmingham's Post Office war memorial names 122 of its employees who were killed in the war and is sited, I believe, at the Birmingham Mail Centre in St. Stephen's Street:- 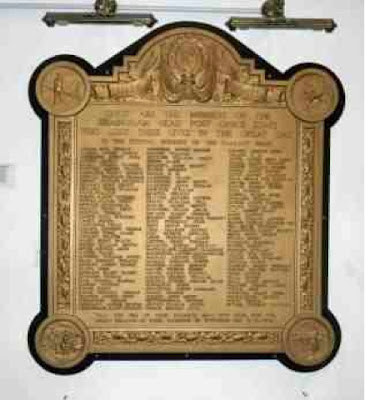 Of the other four former Post Office employees (not in The Post Office Rifles) who were awarded Victoria Crosses, one was another Birmingham man - Sergeant Albert Gill - who was sadly killed in action at Delville Wood on 27 July 1916.
So, by various ways, Royal Mail and The Post Office make a contribution to remembering and honouring the people who sacrificed a great deal in the war that started 100 years ago. No doubt, each city, town and village in The United Kingdom will have had people who were connected with the Post Office and served their country in the Great War. This blog highlights the links of the post office of Great Britain's second city to the war on the occasion of the visit of the travelling exhibition to the city even if the "exhibition" is, for me at least, rather disappointing.