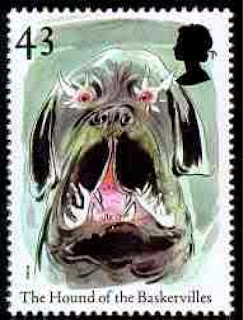 Royal Mail ran a "Dog Awareness Week" Campaign from 30 June to 4 July 2014 to draw the British public's attention to the problem of domestic dogs biting postmen when they are delivering mail. Sadly, no-one I know had heard about the worthy Dog Awareness Campaign and really it needed a Dog Awareness Week Awareness Campaign to have any real impact on the people I had contact with.
The logo for the campaign (depicted below) also has questionable value since most people I guess are aware of dogs. The logo does not really make it clear what it is about dogs about which one should be aware. Though I suppose if I give the subject really deep attention I might deduce that the red background on which the cute dog's paw is placed probably represents danger or possibly the blood shed by postmen in the daily carrying out of their duties. 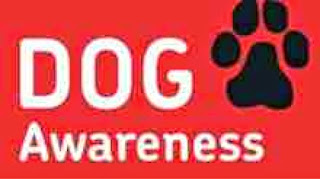 Now something that might really have had an impact is the use of the stamp which Royal Mail issued on 13 May 1997 as part of the "Tales Of Terror" set and which featured The Hound Of The Baskervilles (shown at the head of this blog). This magnificently unpleasant, slathering hound with its eyes glowing red would have been enough to make any dog owner think twice about what their canine best friend might be getting up to when the friendly neighbourhood postman comes a calling at the door. Though, as the Norvic Philatelics Blog points out, it is the cutest, smallest doggies who can reek the most havoc by nipping the postman's ankles or jumping up and biting them. My own dog, I am pleased to say, never demonstrates any interest in tasting the postman but still enjoys beating me to the letterbox to grab a letter or two and to take a chunk out of them before I can rescue them from her. Her look of playful triumph as I finally manage to extricate the post from her dentition is a picture. I'm sorry to say that one or two interesting covers that have found their way through my letter box have suffered damage as a result of my dog's impishness.
The Hound of the Baskervilles also appeared on another British stamp which was issued on 12 October 1993. It was the second stamp of a se-tenant strip of 5 which commemorated the centenary of the publication of the last Sherlock Holmes story written by Arthur Conan Doyle. The monstrous hound rears over its victim with Sherlock Holmes depicted firing a gun at it. 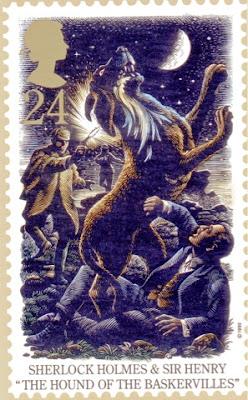 The Black Dog is an important feature of Britsh folklore across the whole country and is usually a bringer of bad luck or harbinger of death. It is known by various names in different regions such as "Black Shuck" in East Anglia, "The Barghest" in Yorkshire and "The Gurt Dog" in Somerset. The creature tends to hang out with ghosts and is found at sites where murders have been committed or executions carried out.
Given the wide distribution of Black Dog folklore across the British Isles, if Royal Mail decides to have another Dog Awareness Week next year perhaps it could  issue an accompanying set of Black Dog stamps depicting them in all their drooling nastiness, from different regions of Britain. I'm sure such an issue would grab the popular press' attention and interest the mail-sending general public and really bring Dog Awareness up the agenda. Well, it's just a suggestion.
Jersey has its own version of the Black Dog - the "Black Dog of Bowley Bay" which is a harbinger of violent storms. It was featured on a stamp issued by Jersey Post, part of a set of four released in 1992  on the subject of local folklore. The stamp was designed by the wonderful Jennifer Toombs whose art has graced many stamp issues from many Commonwealth countries over the years. She depicted it as  a dog with a particularly severe drooling problem and terrifying eyes:- 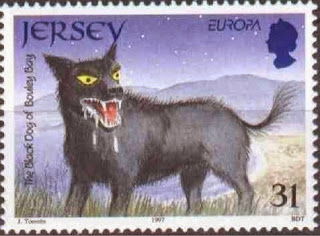 The neighbouring island of Guernsey is home to a cousin of Jersey's beast - the "Tchico" which fortunately has NOT yet been depicted on a stamp since it must be the most terrifying of all the Black Dogs if only because it is headless (which at least solves the drooling problem). Anyone who sees the Tchico is said to die soon afterwards so it is just as well that it has not been featured on a Guernsey stamp since such a depiction presumably might result in a large number of Guernsey post office customers dying soon after going to the post office and buying the stamp!
The Isle Of Man has its own Black Dog - the "Moddey Dhu" which haunts Peel Castle. This particular beastie was featured on a stamp which was released as part of a set of six on the subject of Manx Folklore in 1997:- 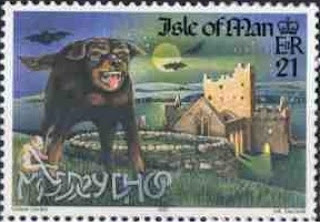 In Devon, there is a village which goes by the name of "Black Dog" which is really a very small hamlet and which despite having a local pub - "the Black Dog Inn" - does not have a local post office. Despite this fact, whenever Royal Mail issues a set of stamps on the subject of dogs, the village's name is usually included in accompanying commemorative first day postmarks and the most horrific of all the philatelic Black Dog depictions has to be the "Black Dog" cancellation which was used for the first day of release of the 1993 Sherlock Holmes stamps. There can be no other more aggressive, slathering hound featured on a philatelic item than that which appears in this particular postmark:- 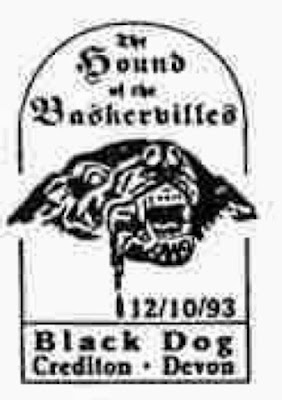 Another postmark from Black Dog was much more reassuring about the nature of our four-legged friends. The cancellation which depicts a cheerful golden retriever-like dog was produced to apply to first day covers of the 2010 set which commemorated the 150th anniversary of Battersea Dog And Cats Home:- 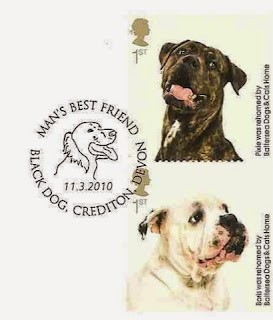 I do not dismiss the nastiness of a dog bite but postmen in another part of The Commonwealth have, in the past, had something even more worrying to deal with - shark bites. The story of the Niuafo'ou tin can mail service is generally well known among stamp collectors. The service involved swimmers carrying mail in cans from the island to ships lying offshore. This seemed like a brilliant idea until 1931 when one of the swimmers was attacked by a shark and died as a result. Thereafter, the mail was no longer taken to the ships by vulnerable swimmers but instead was carried in canoes. 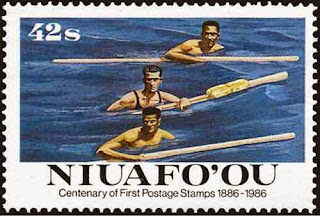 The above stamp was issued in 1986 as part of a set of four which commemorated the centenary of the first Tongan postage stamps. The stamp depicts swimmers taking the post to the offshore ships.  A dramatic miniature sheet was issued the following year in 1987 as part of an issue on the subject of sharks and depicts a mail swimmer being menaced by a rather large shark:- 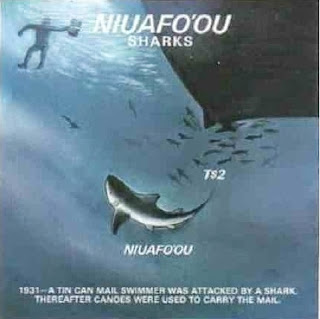 No doubt, postmen in other parts of The Commonwealth have equally bizarre creatures to deal with in the course of the delivery of the mail but be they aggressive dogs, lurking sharks or whatever else, a postman's job is a little more fraught with danger than we may realise.
Despite all of the above, can you really resist this puppy which appeared on one of four stamps issued by Royal Mail on 23 January1990 to commemorate the 150th anniversary of The Royal Society For The Prevention Of Cruelty To Animals?:- 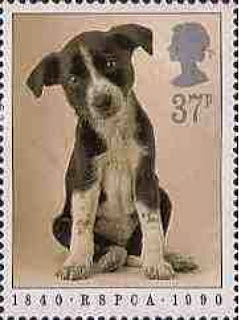