2048. 🏴 Is New Issue Collecting In Its Death Throes? 🇺🇦🇺🇦🇺🇦

🏴 Is the collecting of new issues in its death throes?

The notable US stamp dealer, Herrick Stamps, which has been in business since 1946 and which has offered for many years, fortnightly lists of worldwide new issues has announced that from May it will withdraw from offering new issues to its customers. The message sent out to customers announcing this important news is illustrated below. 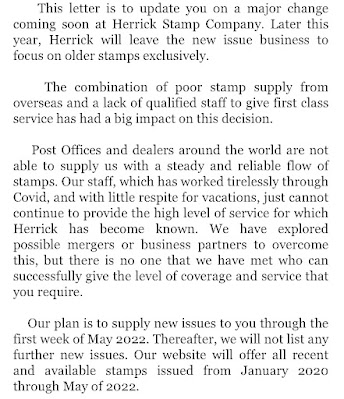 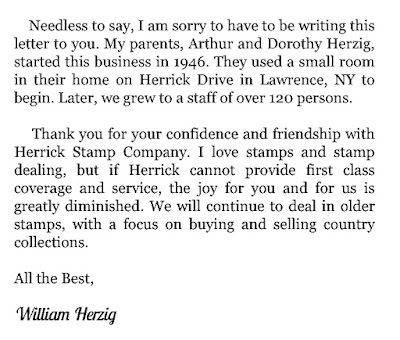 It is remarkable to note that in its heyday the business employed 120 people and of course many of us remember when there were scores of moderately priced new issues coming in from all corners of The Commonwealth, as well as the rest of the world, every week necessitating the employment of such a large number of employees to deal with such numbers. Now, many philatelic entities are inert and rarely, if ever, issue any postage stamps and when they do, as William Herzig acknowledges in his letter, they are often hard to obtain and command a price well over face value and I assume it is a nightmare for any philatelic dealer to try to maintain a new issue service which is any way comprehensive though, I have to say that the excellent Bombay Stamps makes a good stab at it.
Of course there are still plenty of new issues appearing on the market mainly from postal services which release them in unreasonably excessive numbers - by now, we all know who these greedy sinners are - Royal Mail, Australia Post, the IGPC agency, the Stamperija agency, Philatelic Collector Inc (more a question of ridiculously high face values rather than number of issues), the British off shore islands and so on. New Zealand Post, Singapore Post and India Post (except last year) are postal services which are very close to excess and this group of sources of new issues probably make up the bulk of stamps appearing on the Commonwealth new issue market presently.
The territories which are clients of Creative Direction/Pobjoy Stamps all have sensibly priced, well-designed and produced, nicely publicised and distributed new issues released regularly but not excessively and if every postal entity were clients of the CD/PS combination then the collecting of new issue stamps would be a very popular, highly pleasurable, pleasingly affordable hobby once more. But, as I wrote above, many postal authorities have lost interest in issuing postage stamps, presumably because there’s no money to be made from it, or even a financial loss.
For decades The Crown Agents dominated the Commonwealth new issue scene and served well their client states and stamp collectors. Now a tiny rump of postal authorities use the chaotic Harry Allen/CASCO to carry out their philatelic needs and collectors are faced with a service where they have to pay excruciatingly high retail  prices for new issues even though Harry Allen is the territories’ philatelic agent, and one assumes, obtains new issues itself at face value though collectors do not seem to have a source to buy new issues at face value themselves.
Doubtless, the COVID-19 pandemic has played its role in making a new issue stamp dealer’s life even more difficult so it is understandable that the point has been arrived at where a dealer such as Herrick decides to pull the plug on selling new issues. The question is, if comprehensive new issue services are soon to be a thing of the past, will that not also be true of new issue collecting itself?
Of course we all know that collecting new issues is a very good way not to invest. Hence numerous over-bought commemoratives from decades ago are being sold commercially at a fraction of their face value for use as ordinary postage. I remember the time when postal services used to set a limited sales period after which unsold stock would be withdrawn from stock and destroyed. This at least gave the collector - and the dealer, I suppose - the knowledge that no more stamps were available at face value and the market value of any of the stamps they possessed might gradually increase. This reflected an integrity on the part of the stamp issuing entity as well of an appreciation that collectors would like to see a gradual rise in the financial value of the products they had added to their collections.
This integrity has long dissipated and many, but not all, postal services continue to sell philatelic items years after they were first put on sale, presumably out of financial necessity, and now, it seems, at lower prices than when they were first offered for sale. This factor alone is bound to reduce collectors’ interest in buying new issues; why buy something now when you can buy it cheaper later? And not only that, why buy something at all when the person you buy it from is actively helping to reduce its value, no matter how pristine and fresh you keep it? 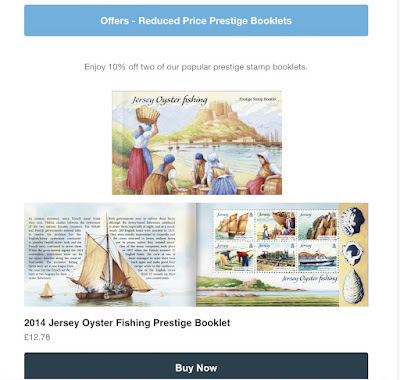 This e mail from Jersey Post illustrates the point well - a promotion of expensive prestige booklets issued almost 8 years ago but still unsold and in stock now being offered at discounted prices, so that the items have not only lost value due to eight years of inflation but also by the direct sales action of Jersey Post. If new issue stamp collecting is in its death throes then the philatelic policies of entities such as Jersey Post are very deeply implicated in its murder.
Post scriptum - please read the interesting and highly informed comments below:-
Posted by White Knight at 01:21