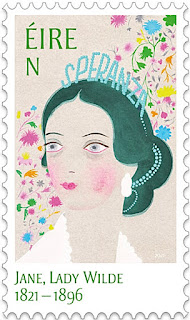 🇮🇪 An Post, the postal service of the Republic of Ireland, issued a single stamp on 4 March 2021 to commemorate the Birth centenary of Jane Lady Wilde who was the mother of the controversial Irish writer, poet and playwright, Oscar Wilde. In her own right, Lady Wilde is described by An Post as having been, “an Irish nationalist feminist, multilinguist, translator and staunch advocate of women’s rights in the 19th century”. She was born in Dublin in 1821 and at the age of thirty married the distinguished ophthalmologist Sir William Wilde whereby she obtained her title. In 1848, during the great famine, she gained fame by writing an unsigned revolutionary article, Jacta alea est (the die is cast) in The Nation, the publication of the Young Ireland movement. She went on to write wide-ranging articles for various British publications. The stamp was designed by Design HQ from an illustration by Brian Cronin and was lithographed by Enschedé and is self-adhesive. I wonder what Lady Wilde would have thought about the illustration of herself. Rating:- **.

🇬🇬 The extremely useful internet site Intelligent AR Post and Go has revealed that Guernsey Post will release the strip of its 6 new Aircraft Post and Go stamps on 25 March 2021 to note its participation in Virtual Spring Stampex 2021 which will be held on line from 25 to 27 March 2021. The issue will be dispensed from kiosk GG02. The additional inscription on the stamps will be “Virtual Spring/Stampex 2021”. 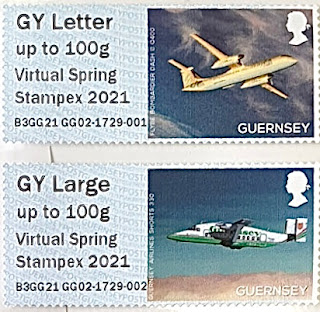 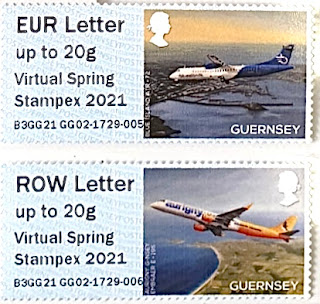 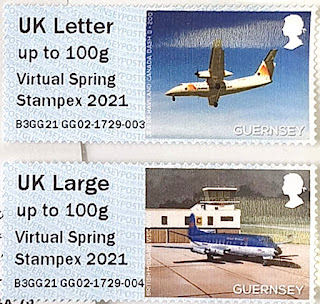 Which Commonwealth philatelic entities have not yet issued stamps so far in 2021? (part 2). Quite a lot. Some are due to release their first issues of 2021 and are therefore not included in this list:-

Hence 59 Commonwealth philatelic entities are still to release their first issues of the year but there’s plenty of time left for them to do so. And no doubt most of them will.