391. The Gambia Cashes In On Royal Christening Despite Rejecting "Neo-Colonialist" Commonwealth. 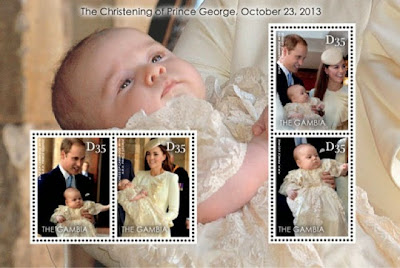 In October 2013, the Gambian dictator, President Sheikh Professor Alhaji Doctor Yahya Jammeh, announced that The Gambia was to immediately give up its membership of The Commonwealth because it was a "neo-colonial institution" and that The Gambia "would never be a party to any institution which represents an extension of colonialism". Unfortunately, he does not seem to have passed that information on to the philatelic agents based in New York which are allowed to produce philatelic items with The Gambia's name printed on them.
On 31 December 2013 a sheetlet of 4 different "stamps" and an accompanying miniature sheet appeared which commemorates the christening of Prince George Of Cambridge, who is third in line to the throne of The Gambia's old imperial master, the United Kingdom, and great grandson of Queen Elizabeth II who is Head of The Commonwealth, that despised "neo-colonialist" organisation. Not an event you really want to commemorate if you state publicly that you will never be a party to this extension of colonialism. Surprising, too, that The Gambia would commemorate a christening when more than 90% of its population are Sunni Muslims.
Fortunately, since The Gambia has left The Commonwealth it has not been necessary to keep track of the items which the country's philatelic agents have produced in its name but it seems reasonable to mention these products here since they highlight what a nonsense much of the philatelic new issue market is in these modern times. I wonder if President Sheikh Professor Alhaji Doctor Jammeh knows about these items and if he is happy to see members of this arch neo-colonialist family appearing on items which could be used on his countrymen's mail. 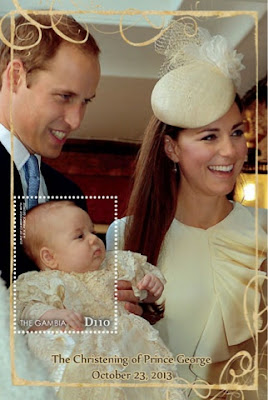 Meanwhile, it seems to be necessary for Guyana to commemorate foreign painters who have no connection whatsoever with this South American country. Stated to have been issued on 24 March 2014 is a sheetlet of 4 different "stamps" and a miniature sheet containing 2 additional designs which commemorate the 150th anniversary of the birth of the French artist, Henri de Toulouse-Lautrec:- 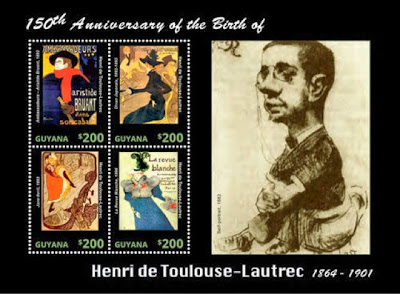 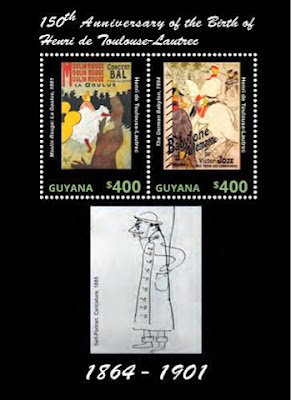 Additionally, on 24 March 2014, 2 items titled "World Famous Paintings" were released which depict art by European artists - a miniature sheet featuring a painting by Vincenzo Catena and a sheetlet of 3 different stamps depicting paintings by Eugene Delacroix:- 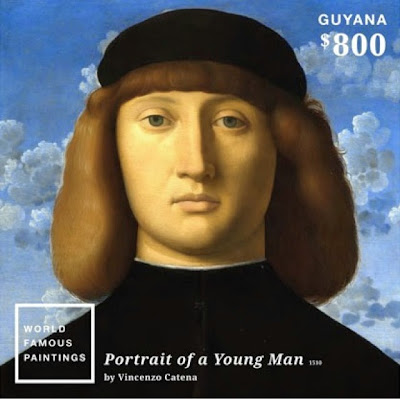 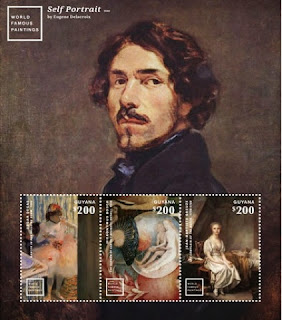 An issue consisting of a sheetlet of 6 different stamps and 1 miniature sheet will be made for Guyana on 2 May 2014 to commemorate the "Philakorea 2014 World Stamp Exhibition". The designs feature garden flowers of South Korea and no attempt has been made to make the items relevant to Guyana itself:- 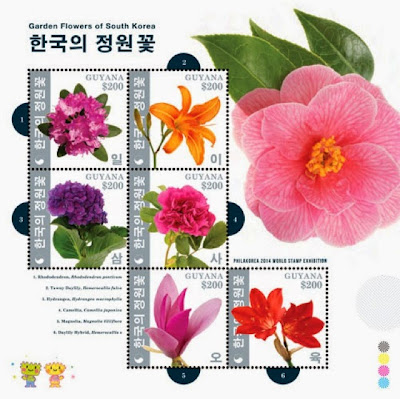 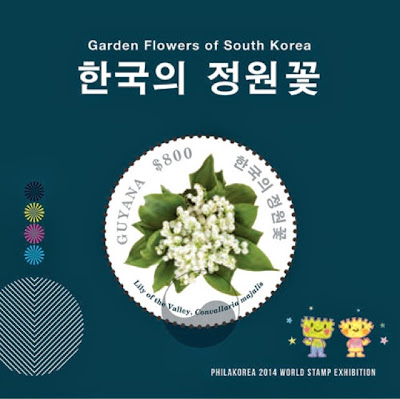 On the same date a sheetlet of 4 stamps and 1 miniature sheet containing 2 different stamps will be issued in the name of Guyana to commemorate the centenary of the Panama Canal. No attempt has been made in the designs to link Guyana to the subject. 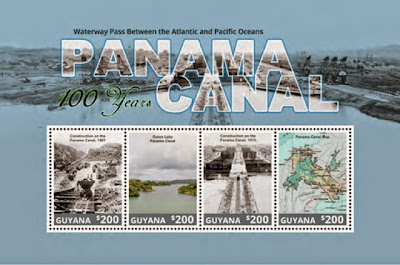 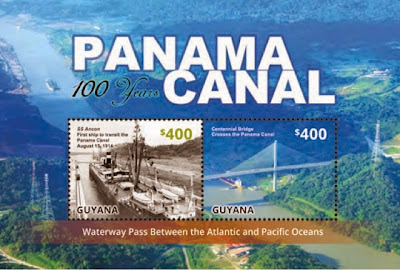 St. Vincent And The Grenadines issued a sheetlet of 4 different stamps and 1 miniature sheet on 5 March 2014 on the subject of the British television programme, Downton Abbey. As I have written before about this omnibus issue, some of the participating territories get to feature the aristocrats on the "stamps" which are issued in their name and others are stuck with the servants - St. Vincent is in the latter group and does not get to rise up the social scale any higher than the butler. I wonder if there will be a new wave of snobbery rising up among the Downton Abbey stamp countries depending on whether they get to depict the "Toffs" or whether their featured characters are distinctly below stairs:- 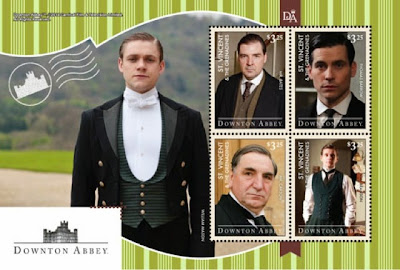 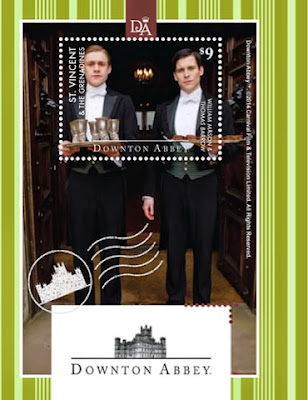 Also issued by St. Vincent And The Grenadines - on 24 March 2014 - was a sheetlet of 4 different stamps and 1 miniature sheet containing 2 additional stamps on the subject of the centenary of the beginning of the First World War I. As we might expect, the designer has made no effort to make the designs relevant to St. Vincent itself:- 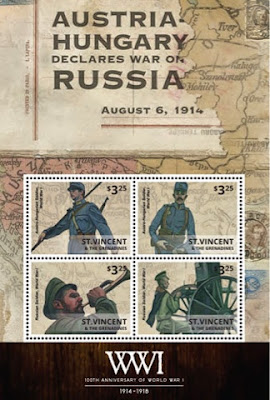 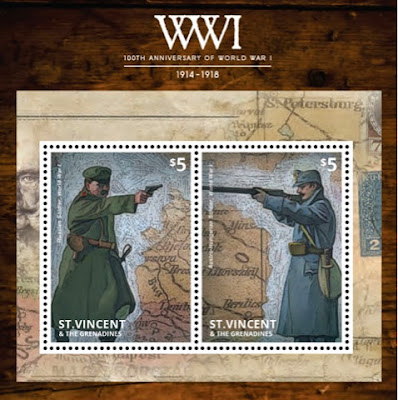 The latest dramatic issue from Hong Kong China features weather phenomena and was issued on 27 March 2014. It is a rather complicated issue which consists of 6 stamps, 1 miniature sheet with ordinary lihographic printing ($5) and a second m.s. printed in lithography with additional lenticular printing ($20) which shows the trajectory of a Typhoon Vicente. There is also a prestige booklet (cost $53) which contains 3 sheetlets each of 6 stamps and a $5 stamp sheetlet. The stamps were designed by Benny Lau and lithographed by Enschede:- 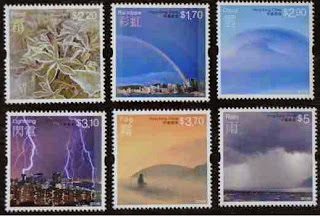 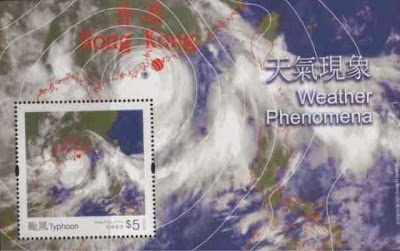 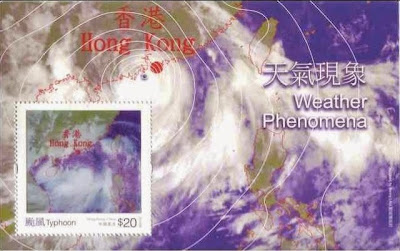 Australia Post issued 3 stamps (2 gummed and 1 self-adhesive from sheetlets of 5 stamps) and 1 miniature sheet on 4 April 2014 to commemorate the birthday of Queen Elizaberh II. The stamps were designed by John White and lithographed by McKellar Renown:- 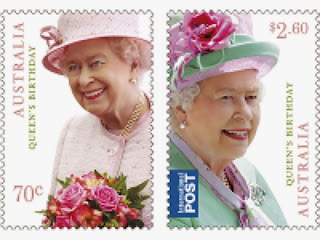 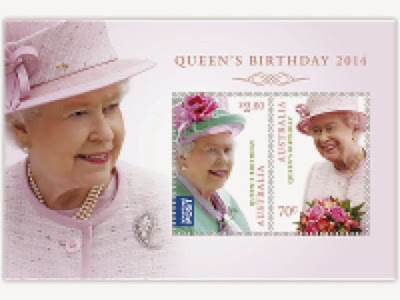 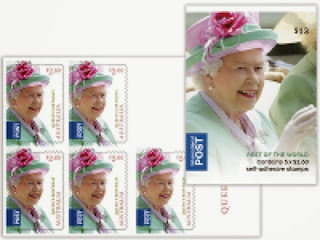